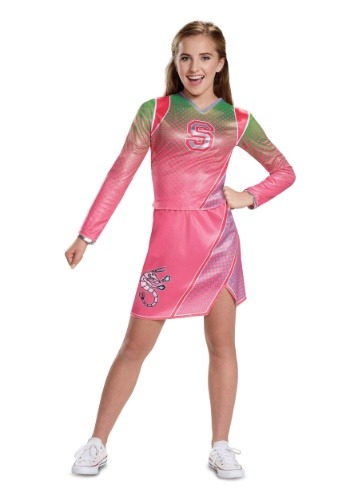 Is your little one ready to cheer for the Mighty Shrimps? Do you think she can be fearless, not cheerless? We bet you anything she'd make the team, despite Bucky's super intimidating tryouts. While for now, she can practice that sharp cheerleader clap, a bright smile, and cheering the people around her, sooner or later she's going to need a uniform to go with her skills. If your child is a fan of Disney Channel's hit musical Z.O.M.B.I.E.S. than you've probably heard all the songs both from the movie and sung by your child hundreds of times. You might even hum "Fired Up" to yourself before a big meeting. Hey, we get it. No judgment here. After so much rehearsal, we think your little one deserves the real deal Addison costume for her next costumed event!

Your little girl will feel like she's hopped out of her favorite movie when she puts on this two-piece costume! The bright pink ensemble has long sleeves with the big Shrimp "S" in the middle and Seabrook printed on the back. A shrimp wearing boxing gloves decorates the elastic-waisted skirt so people won't forget that the shrimps are mighty. When paired with a white wig, your child can even be Addison after she's unveiled her differences in front of the whole school.

If your little one really loves this the Z.O.M.B.I.E.S musical then she probably knows that winning the cheering competition is all about teamwork! Bring in friends or family to wear the rest of the cast's costumes. From Zed to Zoey, we have the characters that it would take to recreate your kiddo's favorite scenes. Hmm, maybe after the trick-or-treating is over and all the candy is counted they could enter the school talent show. We're pretty sure a choreographed lip-synch to fired up would be a hit!