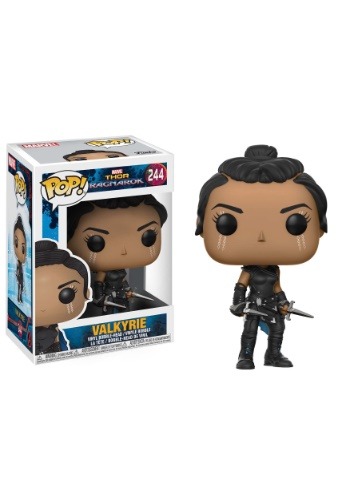 Who cares about Thor? You can keep Thor! Give us more Valkyrie! Played by Tessa Thompson in the Marvel Cinematic Universe, she’s one tough fighter who’s got no problem duking it out with some of the galaxy’s toughest villains (provided you buy her a drink or two after the battle). Oh, and she doesn’t take any sass mouth, not even from Norse gods. She’ll put anyone in their place! She’s kind of our new hero.

So, of course, we couldn’t wait until Funko made a Pop! vinyl figure of her. Lo and behold, here she is in all her glory!

This Thor: Ragnarok Pop! Valkyrie figure brings you the spirited superhero from the Taika Waititi film. She’s just as fierce as her movie counterpart, but she’s also ultra-adorable since she’s been fused with that cute Funko style. She’s all dressed up in some sleek black armor and she’s wielded dual daggers in her hands! She looks ready to face off against Hela, or any  other villain who’s foolish enough to start a scuffle with her.

Make Some Room for Valkyrie

This adorable Funko Pop! is going to look great standing next to your Thor, Loki, and Hulk vinyl figures, so be sure to make a little room for this fantastic little figure!