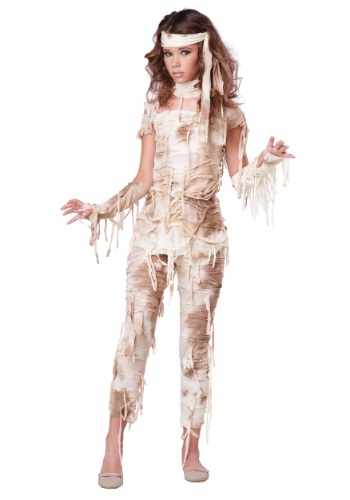 Archeologists flipped when they discovered the tomb of the boy king.  (Literally.  There's evidence that they all spontaneously revealed their acrobatic backgrounds with their sudden handsprings and backflips.)  Not only is it crazy that an entire ancient civilization was once run by a teenaged pharaoh, but it opens up the door to wondering just how many other royal teenagers there might be!

You might occasionally look at your gal and think, 'She's such a princess,' but we think that you are only limiting your scope.  Princesses hardly rule over anything.  It's time to upgrade to an eternal life, ruling over an entire empire!  Of course, those ancient days are just a little late, so there have to be a few minor changes to how you might expect your pharaoh gal to look, but the good news is she won't be lacking for bandaids!

It's time let your teen show her mysterious side with this Mysterious Mummy Teen Costume.  This pant and top combo feature a convincing pattern of shredded fabric straps that look just like ancient mummy wrappings.  The distressed and dirty colorization is just a bonus!  The gloves have hanging straps to give that authentic look of a mummy escaped from her tomb while the matching head wrap and neck scarf complete the enigmatic look.  Fortunately (or unfortunately), the curse is not included.

EVERY TEEN STILL NEEDS HER MUMMY

Kids can be pretty tough to understand, some days.  We might question their music, their dance, their lingo.  But, above all, their style can make us feel ancient.  Then again, styles tend to go in cycles.  It was only natural that eventually we'd see some ancient clothing resurface.  So, keep your teen in style with a modern interpretation of some truly ancient duds.  Watch your teenaged pharoah rule over her domain in true mummy fashion.

$69.99
Item # CA04083 | Write A Review
Items Included
Product Highlights
Size Chart
XSSMLXL
Inches Centimeters
Costume Sizing Tips
Product Description
Questions & Answers
There are no questions for this item yet. Be the first to ask a question!
Ask a Question
Reviews Write A Review