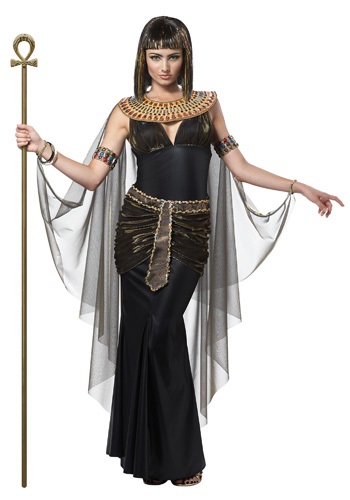 So, you think you have what it takes to be an Egyptian queen? It sounds like a lot of fun, but it's going to be a lot of work! As Queen of the Nile, you'd be in charge of an entire empire of people! And you will have to cater to their needs too. If people are complaining about there being too many crocodiles in the Nile, well, as queen, it's your job to make sure someone takes care of it!

When you put on this costume, you will be transformed into a powerful queen, with the fate of an entire empire in her hands! You'll be wearing a long black dress, sleek and elegant, just like a Queen of Egypt would be. Over your dress, you'll be wearing a regal gold collar and a mesh cape. Last but not least, You'll have a gold belt draped around your waist. Everything about this costume is truly fit for a queen.

When you become Queen Cleopatra, you might find that the power kind of gets to your head. It's important to remember, that while you're a queen, No one likes it when you're too bossy! So, just pick your battles, you know? Maybe get the car door for yourself, maybe you feed yourself the grapes rather than letting someone else feed you! Just remember, happy subjects makes for a happy queen!

$68.99
Item # CA01222 | Write A Review
Sign Up To Be Notified When Your Size Is Available
Items Included
Product Highlights
Size Chart
SMLXL
Inches Centimeters
Costume Sizing Tips
Product Description
Questions & Answers
There are no questions for this item yet. Be the first to ask a question!
Ask a Question
Reviews Write A Review