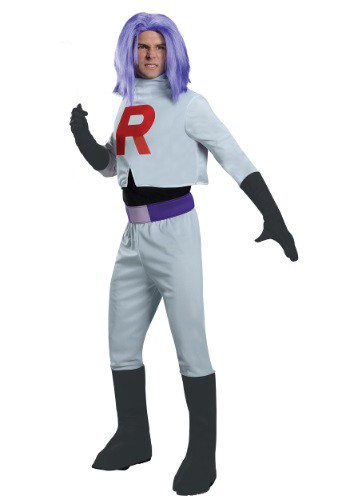 Here’s something we never got about Team Rocket. Their whole goal was to steal rare Pokémon, right? So they spent nearly every waking moment of their lives trying to kidnap one single Pikachu, despite the fact that you can catch one in the wild within, like, 30 minutes of starting a new game of Pokémon Red. We’re pretty sure Professor Oak would have just given them an even rarer Pokémon if they’d just asked him nicely. That’s kind of what he’s there for. And where does all this thievery get them? Stomped, zapped, and otherwise blasted at the speed of light into the outer atmosphere for 671 consecutive TV episodes. You’d think they’d eventually get the message.

Team Rocket’s three members are Jessie, James, and a talking Meowth named -- wait for it -- Meowth. (Why they never addressed the fact that Team Rocket had one of the world’s only talking Pokémon is beyond us too -- wouldn’t that make Meowth far more valuable than a Pikachu who could only say his own name?) James prefers poison-type Pokémon, which are a really good idea to carry exclusively because it’s not like one single low level psychic-type could wipe out your entire team in five seconds. At least he has style -- it’s widely known that guys who carry around a rose are always a hit with the ladies.

With our James Team Rocket Costume you’ll have all the clothes you need to capture the lovable scamp’s look. All you’ll need is the handsome brigand’s impossible purple anime hair, which we conveniently also have in stock, and to teach your cat how to come up with snappy one liners. This will be hard to do, and once you have other people are sure to try to steal him from you. Wouldn’t that be ironic?

$87.99
Item # RU887328 | Write A Review
Sign Up To Be Notified When Your Size Is Available
Items Included
Product Highlights
Size Chart
ST
Inches Centimeters
Costume Sizing Tips
Product Description
Questions & Answers
There are no questions for this item yet. Be the first to ask a question!
Ask a Question
Reviews Write A Review