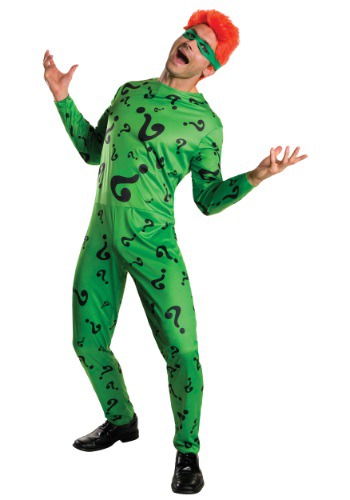 Do you know what is really frustrating? This Batman character keeps solving crimes and everybody is saying that he’s the World’s Greatest Detective and that he’s SO brilliant, and nothing can confound him. Blah, blah, blah. You know the truth. You know that you--and you alone--can create enigmas that he could not solve in his wildest dreams.

So, what’s a guy to do? What does a brilliant genius like yourself do to prove to Gotham, and the world, that the Batman is not as clever as everyone thinks? Clearly, you become a riddle yourself. You throw on this Men’s the Riddler Costume and create mysteries and puzzles and logic games to confound and confuse the Batman, all the while putting the public in a state of great fear. You are kind of like the Joker, but better, smarter, funnier, a bigger risk taker, and a greater showman! Your ability to annoy and intellectually dominate the Batman is your greatest asset and pleasure, and surely this costume will help you devise the greatest criminal exploit your city has ever seen. By the time Batman figures it out, he’ll be way too late to do anything about it!

Of course, we do not advocate illegal activities of any kind, but if this officially licensed costume--complete as a full question mark jumpsuit, including a foam eye mask--doesn’t get you into the spirit of leading law enforcement on a wild goose chase of riddles and mazes, then we don’t know what to tell you.