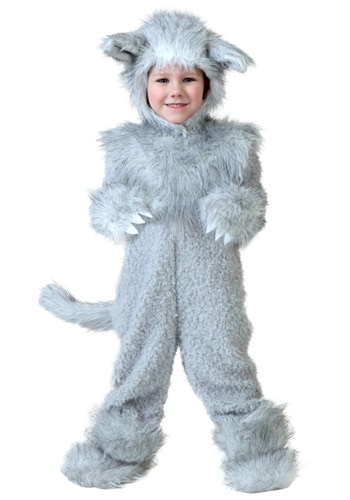 ”Dog” may have been your kiddo’s first word, but we can already tell she is a bit too wild to be domesticated! And we think that is totally A-OK, because wolves are pretty much the coolest animals ever and we need more of them in the world. Of course, we aren’t the ones trying to put her down for her nap, but still, we encourage you to let her explore her wild side!

Wolves are highly social animals, and your little one is no different! She’s always making friends and playing well with others, and she picks up new behavior every day. Of course, unlike a wolf, the most your kid ever hunts for is a matching sock, but still, your gal is the leader of her little wolfpack! In this Toddler Wolf Costume she will get to explore her prowess at preschool, at home, or on the trick-or-treating circuit. And while an actual wolf would likely be on it’s own by the age of three, we think you’ll probably be keeping your kiddo by your side just a bit longer, to make sure she is ready for the wild world.

This jumpsuit will keep her warm and cuddly (and adorable) even when she crawls outside at night to howl at the moon. It includes mitts and fur booties, as well as a fuzzy gray hood with wolf ears. Pair her up with Little Red Riding Hood or let her run her own show. Just don’t be surprised if it takes you awhile to get your pup settled at the dining room table--such a wild beast isn’t used to the formality of family dinner!