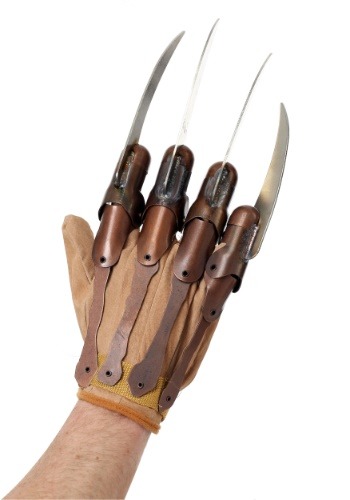 ONE NIGHT AT FREDDY'S

Freddy has certainly developed quite the name in horror over the last several years.  Obviously, we all recognize the terrifying nightmare that is Freddy Krueger, who literally traveled through the dreamscape in order to bring all of our delightful dreams that unexpected dose of murder.

But, all of a sudden we’ve got adorable animatronic animal mascots at pizza places who are going rather murderously berserk, all for the name of a different Freddy.  We’re beginning to think that the name is cursed.  What’s next?  A certainly adorable detective dog getting fed the wrong kind of treats by Fred!?

Fear not.  All we need to do is give you the power, instead.  You can feel the power over dreams with this Freddy Supreme Edition Glove.  The comfy glove fits easily with Hook and Loop fastener but has metal hinged attachments and 7 inch replica metal blades to freak all your friends out.  Ugh.  Freddies.  What are we gonna do!?

GET THAT SONG MEMORIZED

Well, that’s clearly a terrifying thought to even ponder, which makes us begin to think that all of our concerns are just the stuff of nightmares, anyway.  What’s the song?  One, two, Freddy’s coming for you?  Well, before we get that far, how about we take some of that terror out of the equation by giving it to you instead with this movie quality prop replica Freddy Supreme Edition Glove.

$84.99
Item # RU35508 | Write A Review
Items Included
Product Highlights
Size Chart
ST
Inches Centimeters
Product Description
Questions & Answers
There are no questions for this item yet. Be the first to ask a question!
Ask a Question
Reviews Write A Review