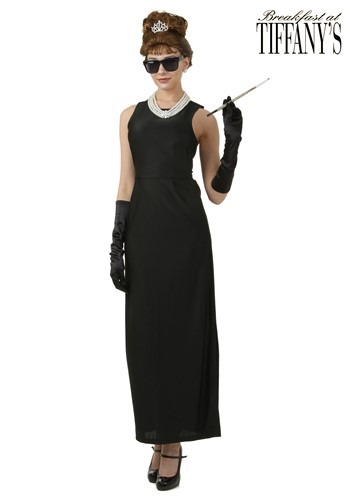 Audrey Hepburn may be best known as the actress to portray Capote’s famous protagonist Holly Golightly but there has been an awful lot of speculation about who exactly this zany heroine was actually based on. Who was the real Holly Golightly? Well, once you toss on this Breakfast at Tiffany’s themed costume, you’ll look just like the star of this masterpiece in American cinema. There won’t be a question as to who the real Miss Golightly is when you waltz into the party scene with this swanky getup. You’ll look like Manhattan’s most beloved café society girl!

Would you rather hang out at the ritziest shindigs or run around the streets in a wacky mask this Halloween? Either way, you’ll be bringing Hepburn’s renowned role off the big screen and into the party scene. Holly was a wild child who couldn’t be tied down by anyone (besides ‘Fred’ from the film adaption), so spread your wings and fly free. Ask yourself ‘what would Holly do?’ and then go right on ahead and do it! Live a night in Holly’s shoes and have everyone wishing they could join you for some breakfast at Tiffany’s.

This officially licensed costume consists of only a few components but it will be more than enough to transform you into Holly Golightly. A long black dress with a zipper will get you started in the right direction. Adding the pair of black elbow length gloves will get you into any fancy soiree. Then lastly, throw on the pair of black shades for a casual touch.

You’ll have something working for you, you’ll have the people interested, and you can really roll when you go out in this Holly Golightly Costume this Halloween. Truman Capote will rest easy with you out and about perfectly portraying one of his most celebrated characters.