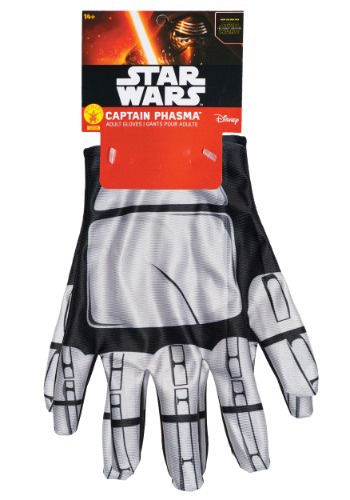 There’s nothing more astounding than a troop of soldiers who are lead by a commander that can bring out their very best.  But, when it is the Stormtroopers who are being raised to that terrifying echelon, you know that you’re looking at someone special.  Let’s face it… the Stormtroopers do not have a history of being particularly great at their job.  But all that changed when Captain Phasma arrived and took the Stormtroopers of the First Order into her hands.

Shifting from a group of soldiers that had an accuracy rating of under 10% to a fierce and properly trained crew that would send the newest wave of rebels running for the woods, the Stormtroopers are now a force to be reckoned with!  Show off your own command ability by taking those very forces into your hands.  You can do so pretty literally with these adult Star Wars Episode 7 Villain Commander Gloves of Captain Phasma.  These officially licensed polyester gloves will not only be warm and comfy but bare the designs of the epic First Order commander, fitting for all your costuming needs.