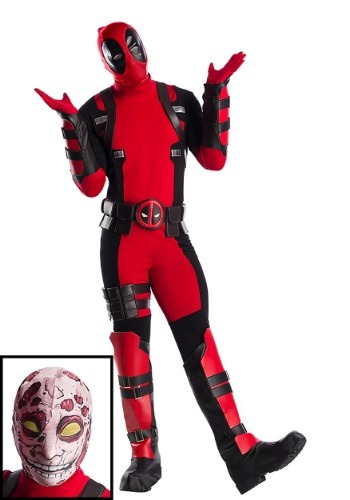 Take a look at most of Marvel’s superheroes. They’re always scowling or putting on their serious face. Have you ever seen Wolverine? The guy wouldn’t know a joke if it slapped him across the face! And then there’s Cable. We think that stick-in-the-mud had his sense of humor surgically removed by Forge in an alternate future. Of course, then we have Deadpool. Thank the Phoenix Force for him. He might constantly be placed in the most dangerous situations a man could even find himself in, and yet he still finds the time to make a wisecrack or two. And that’s a good thing for you when you decide to cosplay as Deadpool.

Yes, that’s right. When you dress up as Deadpool, you get a free pass to make jokes, speak with unrestrained sarcasm, and act like a total goon. And guess what? That’s way more fun than acting like Cable. If you dressed up like Cable, then you would have to stand in the corner, scowling and grunted at everyone at the convention. Yes, Deadpool is your man.

This officially licensed Deadpool costume is a premium outfit that helps you look like the Merc with a Mouth. It comes with the bright red jumpsuit that looks like it was lifted straight from the pages of an old-school X-Force comic book. It has black accents along the sides and it even comes with a belt that has his symbol on the front. Both the gauntlets and boot covers are a matching red and black color scheme, but the dual masks are the real treat. It comes with the iconic mask with the large black eyes, but it also comes with a second mask! This second mask recreates the look of Wade Wilson’s scarred face, allowing you to roleplay as the mutant hero as you like.

You don’t have to be serious for a second when you head out wearing this premium Deadpool costume! Since you’ll be portraying the Merc with a Mouth, you can act as wacky as you like. You can even break the fourth wall with this outfit!