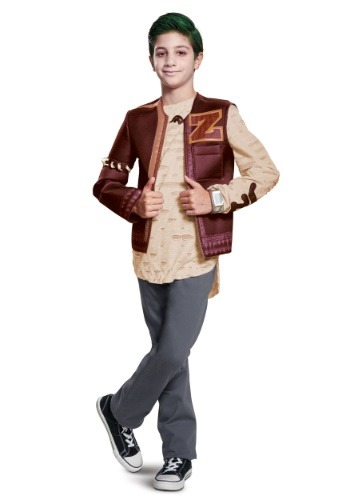 Change makes people nervous. We want everything to be predictable. So it makes sense that folks balked when the school system wanted to integrate zombies and humans. They most likely caused a lot of trauma before zombified society came up with brain replacement. After all, you gotta eat! But now the zombies are much more peaceable. They've got a wild green style but that doesn't mean they don't want to live the high school dream! Zed here wants to play football. His little sister wants to get a puppy. Zombies are doing their best to work with living folks to prove they're not just meatheads. They feel emotion like the rest of us. They're just a little rougher around the edges. And tougher on those edges too.

Letterman jacket meets zombie wear in this licensed Disney zombies costume. One sleeve is mended while the other one has a rugged texture that would look just right on the zombie side of town. Pair the jacket with pale eye makeup, green hair dye, and a football and every Disney fan will know they're dealing with one of the most charming undead fella in Zombietown!

Maybe your child has been singing tunes from this show for a while now. Or perhaps this Halloween costume request was the first you've heard of this guy, Zed. Either way, this costume is sure to make your kiddo smile! He can even pair up with the rest of the main characters from the show. Hey, maybe now zombies can finally get a dog! Just make sure you don't tease him about his taste in brains.