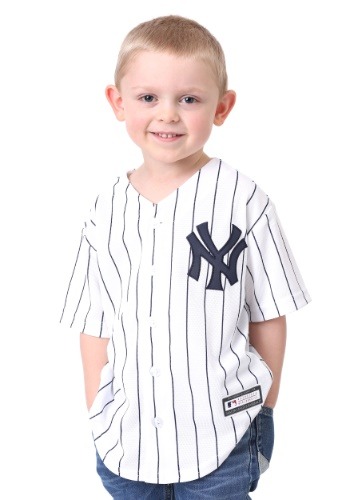 Time to step up to the plate. For the one, the only, the biggest team in the Big Apple. Yes, we're talking about the New York Yankees here! And it's your kid making his way out of the dugout. How in the heck did your kiddo get signed to the team!?

Of course, he's a few years from getting drafted to the team, but that doesn't mean he can't show off his major league ambition. As long as you get him the right gear! Start his fan status out right with this Yankees Home Replica Blank Back Child Jersey. He'll be ready to dream about playing with the pinstripes on!

Taking him for his first trip to New Yankee Stadium just wouldn't be right if he doesnt have the top fan gear, so make sure he has this Yankees Home Replica Blank Back Child Jersey ready to go. He'll look like a star when he's rooting from the stands!

$51.99-$52.99
Item # OT76WAB-02 | Write A Review
Sale - Save 36%
Items Included
Product Highlights
Size Chart
45/67
Inches Centimeters
Product Description
Questions & Answers
There are no questions for this item yet. Be the first to ask a question!
Ask a Question
Reviews Write A Review