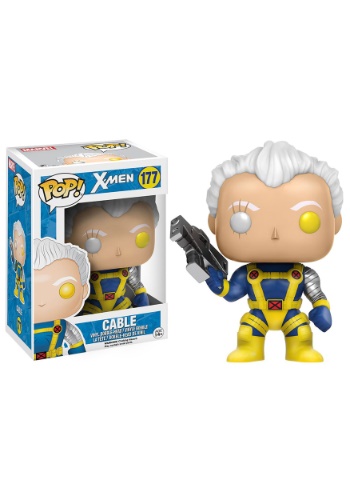 Take a deep breath, because we’re going to try to summarize Cable’s backstory in a single paragraph. He’s the biological son of Cyclops and Madelyne Pryor, the clone of Jean Grey created by Mr. Sinister. He was taken to the future and raised by his future half-sister from an alternate timeline, because Apocalypse infected him with a techno-organic virus that will eventually consume all of his flesh. He’s now traveled back to the past to kill Apocalypse (the guy who infected him with a crazy techno-virus) from turning the world into a dark future. And… well, there’s more but we don’t have all day here! Really, the only important thing you need to know about Cable is that he’s one deadly dude that you don’t want to mess with… and that this Funko POP vinyl version of him is completely adorable.

Based on the X-Force leader himself, this Cable POP vinyl has all the characteristics you could want in a Cable figure. It has his one yellow eye and his one arm is painted to look like metal. He’s even holding a giant gun like in his arm, just the way he likes it! It’s a great gift for any X-Men fan and he looks great next to your Deadpool figure.