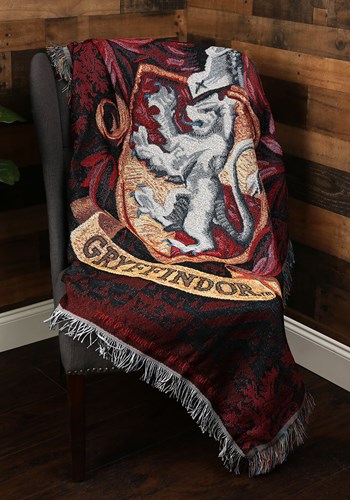 ”You might belong in Gryffindor, Where dwell the brave at heart, Their daring, nerve, and chivalry Set Gryffindors apart” —The Sorting Hat

One of the four Houses at Hogwarts School of Witchcraft and Wizardry, Gryffindor was founded by Godric Gryffindor, a wizard known for his courage, chivalry, and determination. Poor Godric has since been overshadowed a bit, lately, though, by what is now arguably its most famous house member, Harry Potter. Gryffindor’s animal emblem is a lion, and because the house corresponds closely to the element of fire, so chosen are the house colors of scarlet and gold (which look great on a scarf, by the way). Because it’s Britain and everything is arguably very eccentric and posh, Gryffindor even has a house ghost: Sir Nicholas de Mimsy-Porpington, a jolly old ghost also known as "Nearly Headless Nick”!

If you feel like you would have been sorted into Gryffindor, too, then this Harry Potter Gryffindor Crest Tapestry Throw is the perfect thing to make your house feel just like it's part of the Gryffindor tower at Hogwarts! Hang this in your own hall and it will be the perfect addition to attract the best and brightest people to your castle!