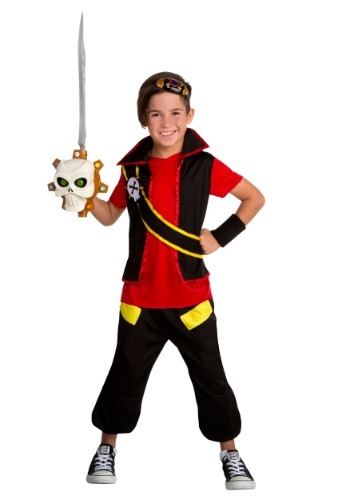 What would five things would your child bring to a desert island? We're actually curious. We've been adults for too long so we're used to the typical answers of various survival items like Swiss army knives and tarps with a few Pina Colada jokes thrown in. We're guessing there would be more candy thrown into your kiddo's answer. Maybe he'll come up with even more high seas survival ideas while watching the wild adventures of Zak Storm. Zach Storm is a pirate with power. He didn't know what he was getting into when he stole his father's necklace and was sucked into the adventurous world hidden in the Bermuda Triangle. And now he's got more power than a teenage boy knows how to deal with. Then the talking sword of Calabrass was thrown into the mix. No wonder why your kiddo can't get enough of this cartoon!

Your child can become the coolest pirate on the high seas with this costume! The costume includes black pantaloons that are cropped and cinched around the ankle, perfect for climbing to the crow's nest. then there's the black and red vest with a skull detailed bandolier that gives any sailor a modern, sea-worthy look. And while the eyepatch can't be used as a telescope, it will polish off Zak's look nicely! And let's not forget the included Calabrass sword that will serve as your kiddo's mentor and protector on his wild adventure. Looks like he's ready to set sail!

Hangin' Loose With the Crew

Zak Storm combines two ocean cultures that, by all rights, should have come together long ago. Pirates and surfers combine treasure and chill in a match made in Davey Jones' Locker. Whether your child is facing down sea monsters, a literal skeleton crew, or a night of trick-or-treating, this costume will make you ready for anything!

$51.99
Item # LI30292 | Write A Review
Items Included
Product Highlights
Size Chart
4/68/10
Inches Centimeters
Costume Sizing Tips
Product Description
Questions & Answers
There are no questions for this item yet. Be the first to ask a question!
Ask a Question
Reviews Write A Review