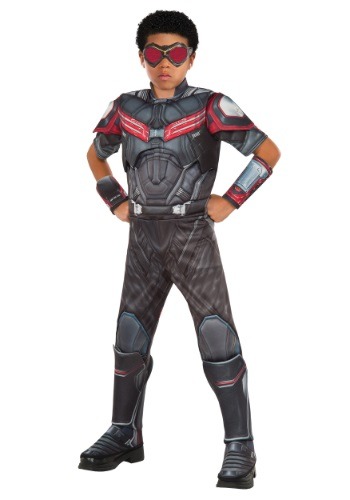 Who's up for a quick flight around the neighborhood to battle the latest intergalactic threat? We're sure your kid is, and hint hint, he's going to have one heck of a superhero team backing him up. Because we're talking about him joining the Avengers as The Falcon. Now that sounds like some serious fun!

This Boy's Falcon Civil War Deluxe Costume will do the job of turning him into a serious superhero, and it will do a darn good job of it, too! Mostly because it has everything he needs for the job. The gear includes a short sleeved jumpsuit, arm gauntlets, and an eye mask to top it all off. The suit is fully printed with armor details, and it has foam armor overlays to give an extra effect.

Red mesh goggles recreate the look of Falcon's high tech optics, when your kiddo has it on, he's going to look just like the real deal! Snap a few photos, and we're sure he'll be a superhero star. Face it, he's going to be famous after he gets this costume. But when you become an Avenger, well, that's just another part of the gig!

$20.99-$68.99
Item # RU620599 | Write A Review
Sale - Save 70%
Sign Up To Be Notified When Your Size Is Available
Items Included
Product Highlights
Size Chart
SML
Inches Centimeters
Costume Sizing Tips
Product Description
Questions & Answers
There are no questions for this item yet. Be the first to ask a question!
Ask a Question
Reviews Write A Review