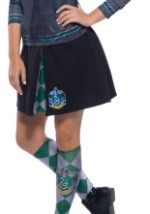 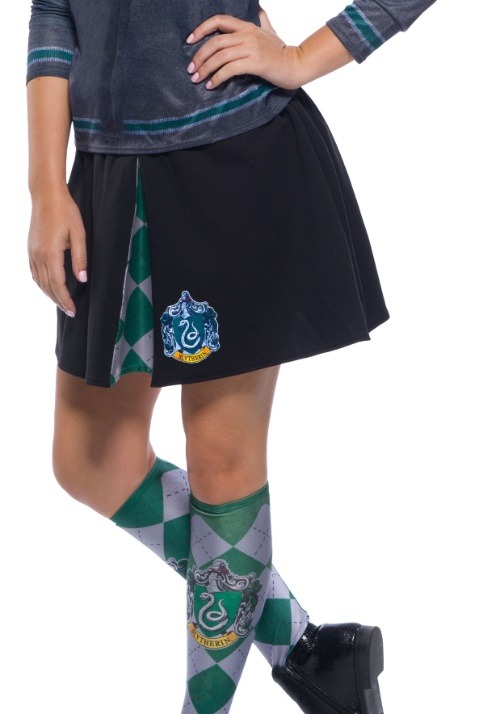 School is in Session

How would you feel about wearing a school uniform for seven years of your life? We rarely think about the fact that the kids at Hogwarts literally move away from home for about eight months of the year. Of those eight months, they wear the same uniform about eighty percent of the time! Lucky there are house elves running the school because we can't imagine any eleven to eighteen-year-old we know taking care of their own laundry on a regular basis. You know what else is lucky? The fact that the uniforms are so cute! What's more classic than a pleated skirt paired with a pair of knee highs? Topped with a wizarding robe, the students of Hogwarts just might miss this look once they are graduated.

You'll stick to the high-brow Slytherin standards when you're rocking this pretty pleated Slytherin skirt. The black material is accented with a shiny green and gray argyle pattern that looks great with the knee-high Slytherin socks that can be ordered to match. The look is topped off with the eye-catching Slytherin shield, so no one will miss which house you're aligning with!

Slytherin is where it's at when you think of it. They're always taking their competitors down on the Quidditch court and they'll never have a problem when it comes to leadership. And let's not forget that Slytherin's are usually the ones to break into Parseltongue, that Potter kid was the exception to the rule. We're still dreaming about a party where everyone speaks parseltongue, we're sure it would be hiss-terical! Sorry about that pun but let's be honest, one was sure to slither in.