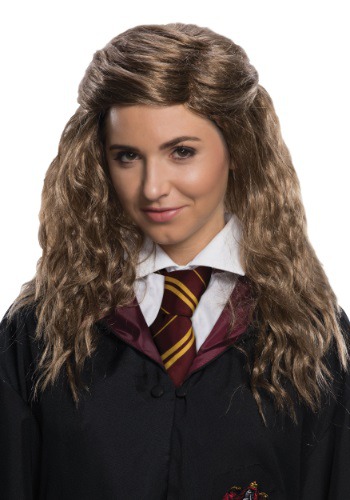 From the start of the Harry Potter franchise, Hermione's hair was often described as "bushy" and always looked slightly unkempt. Well, what do you expect from a witch who rather have a wand in her hand instead of a brush? It would be pretty difficult teaching your peers how to properly cast a levitating charm if you're simultaneously trying to untangle snarls and a witch as intelligent as Hermione would rather cast spells instead of worry about her appearance. You go girl!

However, you don't have to sacrifice your presentation in order to embody Hogwart's smartest Gryffindor. Cultivating Hermione's knotted locks doesn't involve abandoning your brush for weeks (whew!). Just get this Hermione Granger women’s wig to achieve the witch's signature hairdo without sacrificing the condition of your natural hair. The officially licensed wig is styled with long waves and a left side part and features an interior mesh wig cap. Watch how your hair magically change from fabulous to frumpy right before your very eyes!