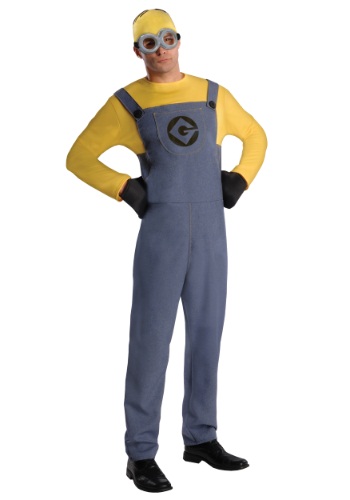 Minions: an ancient species that has had influence over many important events in history. For instance, building the pyramids. If only they had gotten those blueprints right! They served Dracula but it didn't take long before they found out about his deadly allergy to sunlight. Why so influential, these little yellow guys? Well, it's kind of obvious if you think about it. It's because of their great sense of humor, after all, what's more timeless than a fart joke?

The minion, Dave has it all: two eyes, more than a few hairs, smarts, and a sense of humor that never stops! He's definitely got a sweet side as well. For instance, he's the first one to get a goodnight kiss from his boss Gru and, along with his buddy, Jerry, Dave is the only one who stays by Gru's side as the villain tries to abandon his nefarious past. He sounds like a pretty cool guy in our opinion. In fact, he's so cool that he's the only little yellow fella that appears in all three Despicable Me movies. How's that for a resume?

Whether you're dressing up as Minions with the family or you're flying it solo, Dave is a great minion to be. No other characters are quite as silly and charming, so you're sure to have fun! This costume comes with a long sleeved jumpsuit with attached jean colored overalls, adjustable silver goggles, three-fingered black gloves, and a latex headpiece with faux molded hair. Pair it with our hilarious fart blaster to make your look complete. Who knows, you just might change history again if you play your silly cards right!